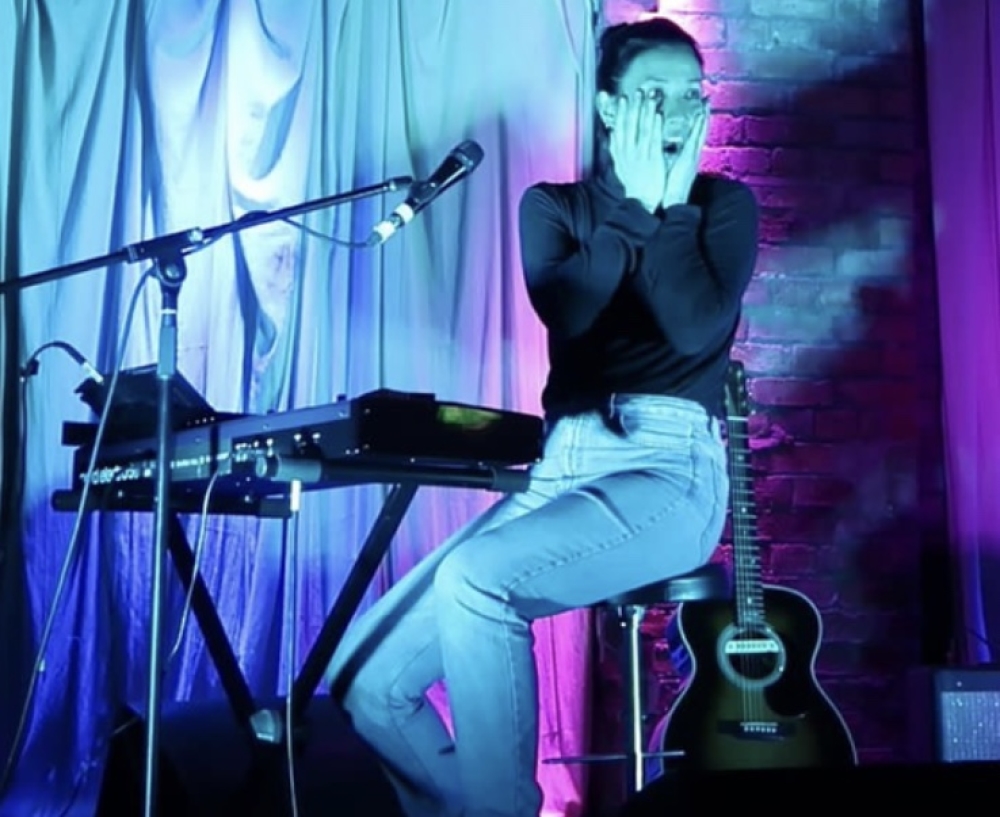 PiPA's Music Ambassador Emmy the Great embarked on a UK tour when her baby RiRi was just five months old. Here's her account of life, a little less ordinary, on the road...

I am annoyed with myself for booking this tour. In the five months since Good Girl Riri was born, we have barely been apart. Motherhood, for me, has been a meditation - a scrunchy-wearing, vomit-stained, oxytocin-induced trance. When Shaun, who is playing guitar at the London show, came over yesterday to rehearse, I could barely speak. Riri and I are codependent. I only know the language of nappy rash and baby-led weaning.

My only consolation this morning was putting her in a new onesie. It has the cast of Frasier dressed up as Kiss on it, and it says 'Keep Listening Tour'. I take photos of her as we wait for Caz, our tour manager, to arrive. Then I realise that Caz will arrive at some point. I rush upstairs to throw muslins into a suitcase. My guitars have been packed for days, gathering dust in the hall. At this point, I'd rather forget a guitar than a breast pump.

My guitars have been packed for days, gathering dust in the hall. At this point, I'd rather forget a guitar than a breast pump.

As the van pulls up, I nervously eye the unbelievable pile of baby equipment on the doorstep. I had forgotten the key part of touring was loading and unloading. My Auntie Lesley, who has volunteered childcare, is our only crew. She is a retired flight attendant and not a roadie. Good Girl Riri is a baby, and not a roadie. I hand her to Auntie, and start lifting cases. Thanks to the muscle memory of past tours, this gives me a thrill.

Twenty minutes into the drive, Riri takes her biggest ever shit. The Frasier sleepsuit is removed in a petrol station forecourt on the M25. We drive for six hours, stopping often for feeds. We are incredibly late for soundcheck. Then we are late getting to the hotel for the bedtime routine. Then I am late getting onstage, because I was laundering pooey clothes in the bathtub.

"Hello everybody!" I say, forgetting the lyrics to every song.

But my fans are my friends. They know I've just had a baby. They take their phones out and Google the lyrics. They laugh as my fingers land on all the wrong strings for the final riff of Dylan, and give thumbs ups when I start War again on the piano. At the end of the set, they line up to tell me, at the merch desk, that it gets easier. They tweet kind words of support, which I scroll through on the way to the hotel, my baby's poo still under my nails. Then I run towards our room and lie beside her absolutely enormous and cumbersome sleep pod, holding her hand and murmuring that I will never leave her again.

Our travelling party sounds like a mashup of 90's films - Four Women and a Baby. As well as Auntie, Caz, Riri and I, there is Bishi, the special guest at the shows. After breakfast, she meets us at the hotel lobby and shyly asks for a cuddle from Riri.

"Did you sleep?" she asks, following up from the conversation we had yesterday when we met. Bishi, a genuinely friendly person, tried to get to know us. Even though her album, Albion Voice, is one of my favourites, I could only babble, "Riri is going through a sleep regression. She wakes up every hour."

The regression came on a week before tour. I fear it will get worse now that Riri is separated from her dad, who couldn't get the time off work. Before we left for tour, I told him, "I'm sure it will be fine to combine touring and baby care, the two most exhausting things I've ever experienced." Guess what - I WAS JOKING.

But it turns out that touring and baby care are so gruelling that they actually cancel each other out! On the road towards Newcastle, I hold Riri's hand as she sleeps in the carseat, and nap for two glorious, unbroken hours. It's the most rested I've felt in months.

Soundcheck is also the longest I've been away from Riri. With a bit of headspace, I am able to talk to Bishi properly. She lets me handle her Ableton Push, and we debate the best EQ for her sitar. I feel almost normal. When the gig begins, I remember how to perform.

At the end of the gig, my boobs fill up with milk. I check the time.

Later, at the hotel, Auntie tells me that Riri cried at around 10:45.

Tomorrow is our day off. Caz's parents have kindly invited us to stay at their house tonight, and Riri has a firm playdate with Caz's two kids tomorrow. All this is taking place in Bedford, so tonight Riri and Auntie will hang in the dressing room during the gig. There will be no bedtime routine in a hotel.

Just before soundcheck, I realise I didn't load in the nappies. I pop out to the van to get them. There are no windows in the boot of the van, and I fumble to reach the bag in the far corner. I hear a slam.

In total darkness, I cannot feel a handle on the inside of the door.

Because I am trying to use my phone less around the baby, I did not bring it, so I can't call anyone or use the flashlight. Cold sweat gathers on my palms as I start pounding on the side of the van, yelling for someone to come. I can't tell if the panic is because of the enclosed space, or because Auntie might get Riri hooked on formula while I wait to be rescued. After five minutes, an extremely nervous man opens the boot from the outside. He looks unsure of whether he's just busted a human trafficking ring.

After the gig, there is a clubnight. I beg the DJ not to turn the volume up til I've got the baby out of the building. She turns it down for half a second, then quite clearly makes it twelve times louder. (If you're reading this, Dr Ho, Riri is safely in the dressing room with ears covered. Please don't quit being our paediatrician.)

There is a new mum in the venue who has left her 6-week-old at home. "I've just spilled all my breastmilk in the portaloo," she says, "I thought you would understand my pain." She is right. I can literally think of nothing more depressing than wasting a pumped feed.

"You really can cry over spilled milk," she says, as we hug.

Manchester - where I recorded the album - is home for First Love. It's also a home-on-tour for me. I have a friend here, Bernie, who I have been staying with since my very first days of making music. Back then, her youngest child was 8. Now he's an adult, and I am about to introduce her to my baby.

I am almost shy as we park in the familiar drive, self-conscious about the changes that motherhood has wrought in me. But it is heaven to be back with Bernie. Tonight will be emotional. We have invited Nicky from the Earlies, who co-produced the album, to the show. Bernie is coming too, with her daughter Alice.

At the venue, Caz and I load our gear up the outdoor staircase, through pouring rain. After soundcheck, we drive back to Bernie's to feed. Although it's really, really annoying to carry a stage piano up slippery iron steps, I am amazed by us - two mothers with three children between us, rolling around Greater Manchester in our transit van. We have already admitted to each other that touring, even with a baby, is easier than being on primary carer duty.

The gig is everything I hoped it would be. Just before Caz and I carry the equipment back down the stairs, I catch Nicky. When we made the album, ten years ago, we finished every session at the pub. Tonight, we take our phones out and compare daughters. Then he goes home to get an early night. "School tomorrow," he says.

Until today, the gigs have meant less than three hours separation from Riri. Now I am going away for the entire day. As the taxi comes to pick me up for the Union Chapel, I feel as though I'm being dragged away for an execution (I've been listening to an Anne Boleyn audiobook).

Caz has brought her three-year-old to soundcheck. He strides around the stage, clearly comfortable in a venue, handing his mum masking tape when she needs it.

Tom, the pianist who produced First Love with me, arrives for soundcheck. His son is a year old, and we talk endlessly about sleep routines. Ed, our old friend and frontman for Stats, joins in. His son is 14 months. I am talking just to join in. I know nothing can help me.

Since the night she went to a rave in Birmingham, Riri has fundamentally forgotten how to sleep. I feel like I am hallucinating from sleep deprivation. Thank god for my memories of Glastonbury 2009, or I wouldn't believe that I could perform while feeling this tired.

I've invited a lot of friends to the gig, and as the crowd begins to fill, I wander the aisles of the venue, looking for them. This is how I bump into Alex, who once booked me to play a gig in his garden. He is here with his partner and a tiny, tiny baby. I am immensely impressed. I should have bought my baby, I think. But I already suggested to Auntie that I strap Riri to my back for the shows, and was kicked out of the aparthotel.

Without the baby, I am finally able to watch the other acts. Stats and Bishi are both extraordinary. I can't believe I'm out so late! And at a gig!

As my show begins, a voice in my head tells me I should be thinking about my child. Try to disassociate from the performance and think only about your baby, it suggests, seducing me. But Union Chapel is my favourite venue, and it's sold out. This feels too good to give up. I give myself permission to focus.

One last song, dedicated to Riri and her dad, then the spell is broken. I thank the audience, meaning it more than ever before - they got me out of the house! Then, because Caz, Tom, Ed, the promoter, my agent, and most of venue staff, have kids at home, we all get the hell out of there.