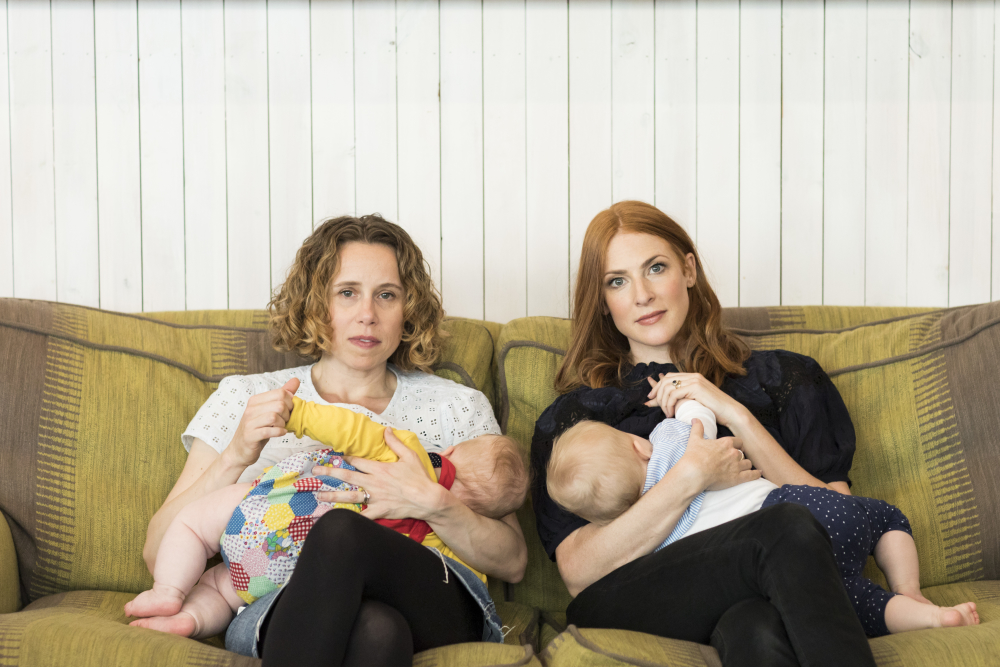 'Becoming: Part One' at the Donmar Warehouse

We caught up with the new Artistic Director of Shakespeare's Globe Michelle Terry and Actress Rosalie Craig to find out more about their recent experience of working on Becoming: Part One with the Donmar Warehouse, which saw audiences invited into the rehearsal space for the first time, for a workshop production about becoming parents.

1) You are currently working on a new show for the Donmar Warehouse called Becoming, about motherhood. What was the impetus for the show? How did it come about?

MT: It began with a conversation with Josie Rourke who first of all said, do you and Rosalie know each other, cos you should, and you've both just had babies, so why don't you get together and have a chat and see what comes out of it.

And then she also said that she felt a responsibility to help her friends raise their children.

This struck us both as an extraordinary thing to say and started us - along with Clare Slater the Literary and Editorial Manager at the Donmar- thinking about the idea that it takes a village to raise a child. After giving birth both of us had been surprised by how we felt physically, emotionally, hormonally and also despite having close friends and family, we were surprised by the isolation that we experienced. So we began to ask ourselves what is the modern day equivalent of the village? Are we part of one? Living in the city, have we rejected the idea of the village? How can we do this without one etc.

The first thing we did was interview each other about our own birth stories and realised how completely opposite our experiences had been. Then we began to think of the immediate village that surrounds you during and just after birth so began to interview "the expert village", of midwives, health visitors, lactation consultants, child psychologists etc and started to compile verbatim material. And then we began to realise that it also takes a village to raise a mother but in order to tell that story we knew we had to start at the beginning and so Becoming Part One was born.

2) The Donmar commissioned Becoming as an experiment with how to work with new mums, as well as being about 'mothering'. Can you tell us about your experience of working on Becoming with small children? How do you make it work?

MT :Part of the remit from The Donmar was that whilst the content of the work was about mothering, the process was also an experiment between us and the theatre to figure out how it could work having babies in the room and bringing them into work with us etc. So we made the babies part of the work and they became indispensable to the making and the performing of the piece.

RC: The Donmar have made going to work with the babies totally possible. From supporting us with transport, childcare, hours to suit us - even finding us a rehearsal space near where we both live to make it possible for us to rehearse with the babies and not have to come into town. It has been a huge experiment for all of us but they couldn't have been more supportive and welcoming.. As the project was baby - led, we had the babies in the room with us at all times as we both wanted to continue to breastfeed and be around the babies. They were incredible at offering their support and help. The whole building has offered us a home from home and it has been a total life line having them.

3) How is the process of making Becoming different to other work you have done?

MT: Apart from Becoming I've not done any other work since giving birth so I've not had to negotiate what that looks like yet.

RC: The process of making Becoming was a totally new experience for me. I'd never written anything before. I have had a lot of experience making new work and collaborating at the national - but had never written a project with anyone before. Also - the idea of a workshop performance piece is an entirely new concept for me - as is working with my baby in the room. It threw up huge challenges and at times it was tough to try and do it all - but a wonderful new tough, which gave us both a huge confidence and sense of pride. Not only in creating the piece but also working with our babies - working together - and being working mothers. Something which we share a huge passion for. As with motherhood - I had no frame of reference for this new kind of work and how we went about making it - but it felt totally possible and thrilling.

4) How has having a child influenced your creative work?

MT: For me, having my baby was the ultimate act of creation so it's become the most expansive prism through which I now view absolutely everything.

RC: Having Elvie has totally changed my creative life and work. Not only has it heightened the impetus to work and provide but also it has focused me in way I hadn't known before. The ambition grows and deepens. It makes taking work more of a headscratch as the choice to leave her emotionally and financially has a huge impact. Creatively - I have never felt so alive. Becoming a mother/parent is the most alive thing I have ever done. Looking after and nurturing a human being means I can only ever live in the present. This industry can make you very introspective and now in day to day life - there's no time left for this. I am raising a child and that is the most profound and important thing I've ever done. But it also makes work profound and important. I want to work for Elvie too - to be a role model to her and to give her the best I can give her in life.

5) What would you like to see change about the theatre industry in order to better support carers and parents?

MT: Unfortunately there is no one size fits all solution to the issue, but even allowing it to be part of the conversation is a big step forward. There are so many ways of making having a baby and a career possible... crèche / on set or industry nannies / flexible working hours / giving out rehearsal or filming schedules in advance / or just let the babies be around We had a baby in the room all the way through rehearsals for Cleansed at The National. It's completely possible if people are willing to make it happen.

When you have a baby it can feel like there is only one childless model of working practice being offered. I think huge conversations are happening where life and art are being allowed to collide a lot more. You can't have one without the other so for me it has only enhanced how creative and imaginative the industry can and should be.

RC: This is a huge area of the industry that needs to change. Where is the childcare support? Where is the financial help with it? I would love big theatres and institutions to provide crèches - for all the staff that work there. Also - be more open to hours and the needs and demands of parents when family life calls. We work in an industry of hugely antisocial hours and it needs to be addressed. I appreciate that these things would take time to implement and not all parents feel that they need the help of the workplace with their children. But it would be incredible to think that if needed - there are facilities provided to help with your children so more creative people could get back to work and be able to afford to as well. It still seems to be a matter of contention if you have a baby or a child and I'm saddened that still in 2017 there is an element of keeping the fact you have a baby hush hush. I would love to see more relaxed performances for parents and children - I'm not talking children's theatre - but so new parents could still go to the theatre with their babies and young children and were made to feel welcome. But my main concern is that we need more help financially in order to make it possible to pay for childcare. The wages in the acting industry have barely changed since I graduated 15 years ago and it needs to change. That way - more creatives wouldn't be afraid to have children because of the cost. A lot of actors fear getting lost after they've had a baby and many talk about the exclusion in the industry once they've had a baby and people presuming they've quit the industry as a result of having a child. That prejudice needs be eradicated, I've never felt more passionate about the work since having a baby.