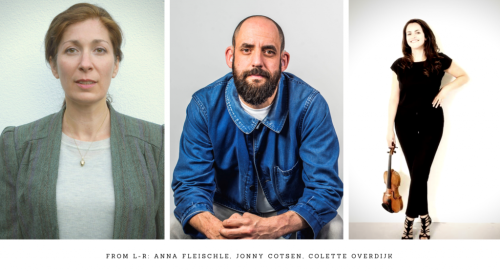 PiPA are thrilled to announce the appointment of three new Ambassadors, each of whom bring unique insights into the challenges faced by parents and carers across the theatre and music sectors. Their appointments further bolster the roster of performing arts professionals dedicated to supporting parents and carers working in the industry.

The early years of having children was a dark place for me. My path was not straight forward - after having made a good place for myself, once I had children my career was literally over. People did not trust a designer who also had childcare to think about.

What threw me when I first had children was the incapacitation that happened. The paradox that the moment you are given the most serious responsibility of your lifetime the industry treats you as if you can't be given responsibility any more - you are not to be trusted. Colleagues would explain to me why they thought I could not do a job - that it would be too much for me - as if I could not judge my capabilities myself any more. It is paralysing - it made me furious. I had to re-build my sense of self again outside the industry before I could return. My way back into the industry was a long and slow path and I still think that the industry would have lost me as an artist had my anger of the injustice not made me into such a fighter.

I still meet countless young female designers who believe they have to choose between having a career or family. It is only now that I have gained a solid position within the industry that I feel able to voice what I need. I now voice things loud and clear because I know that if I don't do it nothing will change. I feel responsible for the younger members of my profession and I promised myself in the bad times that should I ever get to a better place I would fight for better conditions.

When I heard about PiPA I knew I had to be part of it.

Jonny Cotsen was born in Cardiff, Wales and after qualifying as a graphic designer and teacher, left his professional career to develop himself as a performance artist, drama facilitator and consultant for inclusion in the arts. Jonny also runs inclusive drama workshops and is a Deaf Equality trainer for people with and without disabilities, and is a trustee for Disability Arts Cymru. Jonny is currently an artist residence with Pervasive Media Studio which are based at the Watershed working on a new immersive theatre piece which is designed for social change. He does public speaking and enjoys being on panel discussions on access provision in the arts with Unlimited Connects and at other events. His performing credits include: 'English' (Quarantine and National Theatre Wales), 'Louder Is Not Always Clearer' (Mr & Mrs Clark, touring). Ways Of Being Together (Jo Fong), Cardiff: City Road Stories (Sherman Theatre). He is currently completed a successful run at Edinburgh Fringe with 'Louder Is Not Always Clearer', produced and directed by Mr and Mrs Clark and will be touring* across the UK and Europe in 2020/21. [* currently cancelled because of COVID-19]

I'm excited to be joining PiPA's campaign to support parents in the performing arts industry. Being profoundly Deaf, I am constantly campaigning for better access and support in the rehearsal space as well as their audiences which has been quite challenging as it is such a tough industry, so when having two young children it feels absolutely impossible and exhausting! I am aware of how the Arts sector definitely need to become more flexible (and accessible) for parents and that we need better support. I think the work of PiPA will have a relevant and positive impact for those parents that are working across the performing arts to make sure there is a better work/life balance. I want to see change and I am excited to be part of this.

Colette Overdijk is a member of the first violin section in the City of Birmingham Symphony Orchestra. She is also the Musician's Union Steward for the orchestra, works regularly with Birmingham Contemporary Music Group, teaches at the University of Birmingham and often plays in CBSO's chamber music series Centre Stage. She has also guest-led the orchestra of Scottish Ballet. Colette has previously held positions at the Bournemouth Symphony Orchestra and Stavanger Symphony Orchestra. Her Masters Degree (Distinction) was obtained at the Royal College of Music, learning with Jan Repko. In the Netherlands she received her Bachelor Degree studying at the Royal Conservatoire in The Hague, learning with Ilona Sie Dhian Ho.

I have seen how my colleagues struggle to juggle parenting and their job in the orchestra, both practically and financially. A performing artist in the 21st century shouldn't have to choose between a career and being a parent. Childcare in the performing arts, with its antisocial hours, should also be of concern to the arts organisations themselves. I am very proud to become an ambassador for PiPA!