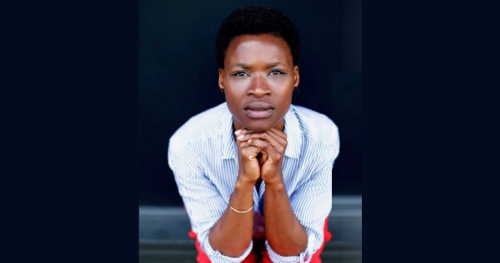 We spoke to Writer, Director and Actor, Adura Onashile to find out about managing a creative career and life with a toddler. This series of interviews is part of a project in collaboration with Federation of Scottish Theatres and funded by Scottish Government’s Workplace Equality Fund.

I am a Glasgow-based, mid-career artist and mum to my 18-month old daughter. Being a parent to a young daughter with no family around to help with childcare has meant me having to make more formal childcare arrangements. This has resulted in me saying no to certain jobs that were not flexible in relation to my childcare schedule.

Having a child has also curtailed how many hours I can spend working and this has led to my work getting “backed up” and being behind on some of my deadlines.

My limited financial situation meant I could not enjoy a long period of maternity leave and had to return to work earlier than I would have liked. One month after my daughter was born I was writing and, when she was around 4 months old, I was back in the rehearsal room.

When I look back I do not know how I did it and certainly could not do it now that my daughter is running around. I did it because I had no choice. She came to rehearsals with me, which was not ideal. I had to write in the middle of the night when she was asleep which was challenging. I would not recommend attempting these things to other new mothers.

On the positive side, I have had to be a lot more astute and only take on work that I really want to do. Making that decision has improved my ability to focus and prioritise given that I have to make the most of the little time I have for my work.

Vulnerabilities as a new parent

Theatre is a profession where people generally work long hours (usually for a modest income). This presents major challenges for new parents. One potential risk involves being overlooked in favour of those without caring responsibilities, particularly given that the competition for jobs can be huge. My concern has been that organisations may decide on the ‘easier’ option and choose the people with no childcare responsibilities. A daunting prospect.

I have often had to negotiate contracts around childcare which feels like an extra burden. In one case, when I negotiated having a crèche at work, the space was unsuitable for my baby given that it was full of electrical equipment. I was very disappointed with this situation and was only in a position to complete my contract because my babysitter agreed to walk around with my baby whilst I was working. On another occasion an organisation provided a crèche which comprised a sofa in the lobby of a busy building with nowhere for me to breastfeed in private.

In both of these instances I found it difficult to speak up in the moment because the organisations felt they had been sympathetic and ‘bent over backwards’ in accommodating my childcare needs. At times this has made me feel I was being unfairly considered as ‘demanding and difficult.’

Thankfully organisations are starting to become more understanding about the difficulties of being a working parent however there is still a long way to go and it is still a work-in-progress for many organisations. I am grateful to those organisations that have been helpful despite it being a relatively recent development, enabling me to take on certain jobs that would have been impossible in the past.

Ultimately it is important that parents do not feel isolated because of caring responsibilities. The more autonomy you have in a role the easier it is to juggle parenting and work. It has been life changing for me in terms of being completely honest regarding my childcare requirements with potential employers.

I now feel more confident about being able to say that I need certain resources in place for me to be able to take on a job. In the end I have had no choice but to ask for support particularly when breast-feeding. This has sometimes meant losing out on certain jobs. However at times the outcome has worked in my favour.

While still aware of the need for organisations to recognise the importance of 100% childcare provision, I have now managed to reach the stage where I hope I am in a position to be able to continue my career development.

I first heard about PiPA through a friend and decided to attend one of their coaching sessions. I found the experience to be incredibly useful.

My coaching session was extremely beneficial in providing me with essential personal development. During the session the coach asked me one simple question – ‘how is it going with your work and being a mother’. I felt I had been thrown a lifeline because up to that point I was just getting on with it – ‘that’s what you do, don’t you?’ The question enabled me to understand how much stress I was dealing with trying to manage my work / life balance.

Reaching out to organisations like PIPA is essential. I feel that PiPA has an important role to play within the arts / performing arts industry in raising awareness of the issues felt by so many working parents. Equally, finding a network of other artist parents can also provide helpful support. Unfortunately parents who are artists often have to make sacrifices with their careers because of childcare. If every arts organisation was willing to have a conversation about this we would make better progress. At times, I have found it to be an awkward conversation to have, however, on the other hand, many of the organisations I’ve worked with were willing to have the conversation, even if what was promised did not materialise.

Through PiPA, I hope and believe that childcare provision is increasingly on the radar and subsequently becoming an integral part of an organisation’s resources. Having the conversations has enabled things to move forward.

I realise this provision comes at a price however I believe it is important that we become advocates for the inclusion of childcare budgets as a priority. Some Scottish-based organisations have shown a commitment to this demonstrating how things have moved on from a few years ago.

What support would be helpful to a new mother?

For any working mother, knowing there was a budget for childcare would be massively helpful. In addition, having a rehearsal schedule around breastfeeding and / or food breaks would be helpful too, as would rehearsals in baby / child friendly spaces.

What are the opportunities to keep parents in the performing arts?

For me, it is simple – having a childcare policy in place in line with all other policies. Be open to having the conversation around childcare so it does not feel like a taboo subject. Have a better understanding around the pressures that parents can face trying to juggle work and childcare.

Think about child friendly spaces, either adjacent to or within the office and rehearsal spaces. But most importantly, have a budget for childcare in line with the national average. With all that in place, it would make it much easier for parents to remain in (or think about having) a career in the performing arts.

The impact of Covid-19

Lockdown has meant all nurseries are closed which has impacted on me not being able to meet a few writing deadlines and I have not been able to take on other work. Some of my scheduled work has also been cancelled, which has had financial implications for me.

I have struggled to unwind at times as any time my daughter has not been with me, I have spent the time focusing on work in order to play catch up. On the plus side, I recognise that I have had more time to spend with my daughter and I am so appreciative of this time, which has been so precious to me.

To find out more about PiPA’s work in Scotlad please email matt@pipacampaign.com